The Evil of the Daleks - New Release

BBC Studios have announced that the second Doctor story, The Evil of the Daleks is to be released as an animated special edition on 27th September 2021.

Today's announcement comes on the 54th anniversary of the broadcast of the last episode of the original version which brought an end to the 4th season of Doctor Who.

The Evil of the Daleks is the mostly-missing ninth and final serial of the fourth season of Doctor Who, which originally aired in seven weekly parts from 20th May to 1st July 1967.

Following the success of the existing animations, The Evil of the Daleks fills another gap in the missing Doctor Who content lost in the purge of the BBC archive soon after the programme’s original transmission. However, audio-only recordings of all seven episodes have survived and have been used here to create a brand new fully animated presentation of this lost classic, featuring the original surviving second episode.

The Doctor (Patrick Troughton) stars alongside his travel companion Jamie (Frazer Hines). The story unfolds as the Doctor and Jamie set out to find the missing time machine, bringing them face to face with a very old enemy - the Daleks, who have a new masterplan to conquer the universe. The Daleks force the Doctor to help them on their quest to ‘humanise’ themselves into deadlier living weapons.

This particular story is notable for introducing the Doctor’s new companion Victoria Waterfield (Deborah Watling), first seen in the surviving second episode, and also for presenting the Dalek Emperor.

The three-disc release gives fans the opportunity to enjoy The Evil of the Daleks, available in either colour or black and white. The release will include:

It's been a privilege to work on this fantastic story with such a brilliant team - thanks to the fans for supporting our work, I hope you all enjoy watching it as much as we enjoyed making it!”
The new animated release will be available on DVD, Blu-ray and a Limited Edition Blu-ray Steelbook from 27th September 2021. Pre-orders are available now from Amazon 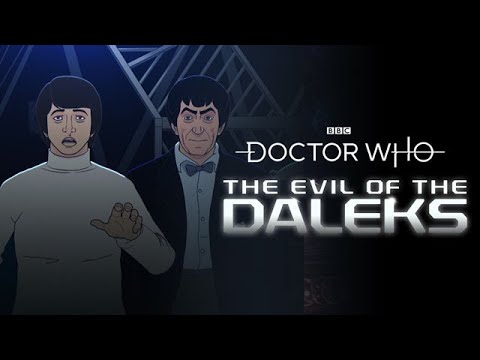 Coming Soon: The Evil Of The Daleks | Doctor Who