A Doctor Who superfan, who has raised over £16,000 for charity, has had the chance to meet one of his heroes, Tom Baker.

Louis Moorhouse has been blind since he was 18 months old. A few weeks ago he launched a fundraising campaign on Crowd Funder in an attempt to raise £15,000 to make it possible for a charity, Living Paintings, to make a set of Touch to See books which will bring him and other blind and partially sighted people closer to the world of Doctor Who.

Having reached his first fundraising target Louis is now looking to raise £25,000 to support the charity that has helped him since he was two years old.

Louis says of his motivation to carry on with the campaign:

Living Paintings has had such a hugely positive impact on my life, from the first time I received a book and found out what Thomas the Tank Engine looks like (until then I had no idea what a train with a face could possibly mean), to helping me learn to read and express myself. I wouldn’t be who I am today without this wonderful charity and I hope people continue to support me on this journey so I can help other children facing the struggles I overcame with their help.”

Louis and Living Paintings have been overwhelmed by the support shown by the Doctor Who community and this week he had the chance to meet one of his favourite Doctors on Zoom.

As well as support from Baker, Louis has received messages of support from Sir Derek Jacobi, Sylvester McCoy and David Bradley as well as the current showrunner Chris Chibnall who said

Louis, this is a wonderful project. I think The Doctor would be cheering you on, all the way. All respect, admiration and support to you 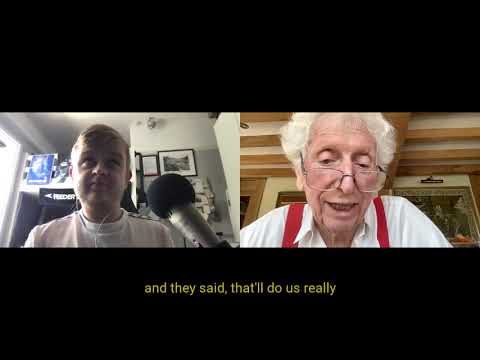 My Chat With Tom Baker!